Creamy Apple Cinnamon Oatmeal is packed with flavor, vegan and so simple to make. It requires only 7-ingredients and 10 minutes of your time!

I love a big bowl of oats in the morning. It’s filling and such a warm and cozy meal. Creamy Apple Cinnamon Oatmeal is definitely one of my favorite combinations of flavors.

These oats are creamy, slightly sweet, packed with warm cinnamon flavor and so delicious. The best part, they require minimal ingredients and time while still providing such a nutritious breakfast.

After tasting these you will always go for homemade oats versus the packaged stuff!

In a small pot add all of your ingredients: water, oats, shredded apple, raisin, walnuts, cinnamon and maple syrup.

Bring to a boil then reduce heat to medium. Simmer oats for 5 minutes stirring occasionally until soft and creamy.

Serve topped with sliced apple, chopped walnuts and an extra drizzle of maple syrup for the ultimate oatmeal experience.

Can I Make A Larger Batch?

Absolutely! This recipe serves one however you can double, triple or even quadruple the recipe with no issues.

It would be excellent to make in a large pot for a hearty family breakfast. It will also make the house smell amazing! Win win.

Is It Better To Make Oatmeal With Milk Or Water?

I prefer to make oatmeal with water however, you can substitute the water in this recipe with any vegan milk. It will lend a bit more creaminess to your oats as well. If you decide to make this using plant milk I would recommend using an unsweetened variety.

If you try this recipe make sure to let me know! Leave a comment, rate it and if you take a photo use #feeninforgreens on instagram. I love seeing photos of your recreations! 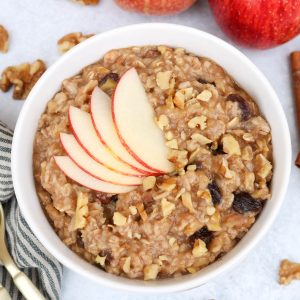 Once you try this, you’ll never make oatmeal any other way. Pure maple syrup in oatmeal is life changing.